Why I Switched To Newsr RSS Reader

Thanks to the Android Central Forums and a post named The officially unofficial "Optimized For Honeycomb" Apps List.  I stumbled upon a new RSS reader called Newsr and started to investigate the new app.

I am a cautious buyer of apps.  I look at reviews and do a Google search to formulate an educated guess on whether to buy an app or not.  Newsr had no reviews or ratings but the developer Chris Stewart put his email in the description.  I went ahead and emailed Chris to see if there was a trial version (there is not at this time).  After a couple of email exchanges I decided to purchase the app.  Here is the market description of Newsr.

Cons (feature request):
Ability to Star/Unstar an article
Need to be able to mark an article as Unread
Would like to one click share in Google Reader without a note
Does not sort by folders (not sure how that could be worked in)

I have been testing other RSS readers and although nice have been missing key features that Newsr have incorporated right from the beginning.  Chris Stewart has assured me that the development continues and he is looking for feedback and feature request to make the app even better.

Don't Let your Android Battery be a Drain

To continue the theme of performance as specified in To Kill or Not to Kill Task in Android.  One area that people complain about a lot is the lack of battery performance from there Android devices.  I stumbled upon a great post Tips to maximize battery life on Android by John Edgar I specifically like how to calibrate a battery he says

“Calibrate the battery by completely draining it until the phone completely shuts itself off. Turn the phone on again and let it shut itself off one more time. Then charge your phonewhile it is off for over 8 hours. This will fully charge the battery so that when the phone is turned on, it now sees the battery as full. It is recommended to repeat this process at least one more time. You will see an increase in your battery’s charge life and longevity. Calibration of a battery can be done at any point and a maintenance calibration is recommended every month.”

Even though Lithium Ion batteries are not suppose to have "memory" like the old nickel cadmium batteries it is still good from time to time to calibrate or refresh your battery. 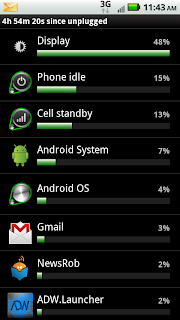 As seen in the image of my battery statistics I am not doing to bad.  The one area that takes up the most battery power is the display.  This is common for smartphones in general.  I was running 62-65% on my display settings.  I  took my brightness setting off of Automatic brightness and moved it to the lowest setting.  As seen in the display I have dropped to 48% and this is taken within an hour of changing it.  I also updated the app Settings Profiles Full change this to the lowest setting upon each change.
No comments:
Email ThisBlogThis!Share to TwitterShare to FacebookShare to Pinterest
Labels: Android, droid x, htc incredible

What makes the Motorola Xoom the perfect enterprise tool?

, Microsoft Communicator r2 and a citrix connection on a device larger than 4 inches. The  Motorola Xoom with it's georgeous 10.1" screen sporting a dual core tegra 2 processor.  The tools that a corporate employee will need to be highly effective on the go are:

NitroDesk TouchDown which lets you connect to your corporate email from your android powered Motorola Xoom. This program takes the brunt of the corporate IT policy instead of putting the policy on your tablet which can cause lockups and lockouts.

Office Talk, Microsoft(R) Office Communicator(TM) Client (OCS) for Android. Allows you to stay connected with your coworkers and customers with the enterprise instant messaging system.  Not all IM clients will connect to an enterprise system for this reason office talk is perfect.

Citrix Receiver labs allows organizations to manage the proliferation of new devices entering the workplace by providing secure, high-performance delivery of virtual desktops and Windows, web and SaaS applications on any user device. You use this app to remote into desktops and servers to administer programs, license managers, users and folder shares.

These alone make the Motorola Xoom

the perfect enterprise level tablet.  Do you use a tablet or smartphone for doing business work?