Tweetcomb is revolutionizing twitter on honeycomb tablets, Must See!

I've had the pleasure of testing a great new twitter app by our friends over at Newsr.  They have taken the app to the market and well worth a peek.


TweetComb is a Twitter client designed and created exclusively for the Android Honeycomb platform. TweetComb gives you a tablet-friendly view of your Twitter timeline, mentions, direct messages, and more.

Features of TweetComb:
-- Interact with Twitter in a tablet-friendly way with the only Twitter experience designed for Honeycomb.
-- Read your timeline, mentions, and direct messages with three distinct fragments. Each fragment interacts with Twitter for updates independent of the others.
-- When new tweets arrive, TweetComb will alert you with an audio clip.
-- TweetComb gives you an easy way to use and switch between multiple Twitter accounts.
-- From an individual tweet, you can reply, retweet, share, favorite, and send a direct message.
-- Quickly send status updates with full support for cut/copy/paste.
-- Support for sending and replying to direct messages inside the app.
-- TweetComb can be shared to from other apps such as the browser, Newsr, and others.

Since launching Tweetcomb to market they have had two updates with significant additions.  I like how they use the tablet's size to show the three most used functions of Twitter.  Which are Timeline, Mentions and Direct Messages.  Recent updates they have added direct messaging from within the direct messages column.

Long press on a tweet and see all the magic offered.  If you are a Android honeycomb tablet user and like Twitter then Tweetcomb is for you. 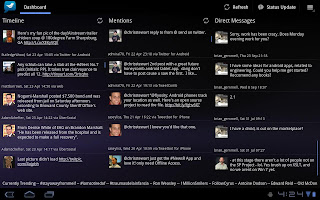 Are you looking for a light weight versatile case for your Motorola Xoom?  Look no further I introduce the Targus Spruce EcoSmart Mini Messenger Case (TBM022US) (Black with Green Accents)

.  This little beauty is classy looking with room for your Xoom, power adapter and business essentials.

On the outside you have a zippered compartment for smaller items.  I will carry ear buds, cleaning cloth and probably will hold my Droid X

in there while running around.  You have a nice carry handle and it comes with a shoulder strap.

.  If you have the protective portfolio case

it will be a snug fit. The other compartment can be used for business items like pens/pencils, business cards, note cards and more. 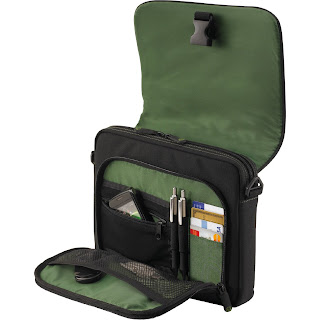 
As you can see this would make a great companion to the Motorola Xoom.  If you have any recommendations please make a comment below.
2 comments:
Email ThisBlogThis!Share to TwitterShare to FacebookShare to Pinterest
Labels: motorola xoom, review, targus
Newer Posts Older Posts Home
Subscribe to: Posts (Atom)